As a cat consultant that visits your home, I am frequently called to troubleshoot litterbox avoidance problems that end up being a cut and dry case of the cat’s refusal to use the litterbox style selected by a well-intentioned consumer.

Cat guardians can easily be seduced into buying litterboxes that appeal to the convenience of not having to scoop it, low litter tracking, small compact size or a design that stylishly camouflages it from public view.

You have a cat. Time to put the work into sharing your space together.

I’m here to tell you that being lazy about cleaning your box and hiring a robot to do it for you is going to blow right back in your face. Shit WILL eventually hit the fan… and then your rug, couch, comforter and throw pillow. Technology and the elimination of waste should probably not mix. I’m just saying. Take a moment to yourself and mindfully scoop your box. You laugh.. but it makes the task less…well …shitty. Remember to breathe… on second thought, you might want to inhibit breathing.

Cat guardians are easily pissed off when their cats refuse to use the fancy-free accommodations they provide. After all, they dropped a dime or two on a box that will make living with a cat easier….right? How’s that working out for you so far? We can fix it. You’re just going to have to slum it for a while with a more basic box that is bigger than you might like to display, but the upside is you’ll be living in a home that doesn’t smell like a veterinarian’s waiting room. Just simplify your approach a little and remember, a cat wants to crap in a huge sandbox (twice their size at a minimum) with lots of drop zones and no minefields (clumps, nuggets, dingleberries, etc) to avoid. Keep the box clean. Keep the litter soft and scent free and match the depth to your cat’s preference. Some like it deep. Some like it shallow. Some want the moon. Give it to them.

Covered litterboxes reduce the headroom a cat needs to sit upright and urinate. This is why they often urinate out the entrance and on to your shag rug. You have given them little choice but to duck and squirt. Now…add to the lack of headroom, an entrance with flaps, stairs, rough feeling entry ways (to avoid litter tracking) or a freakin’ turnstile for dog’s sake and we have a recipe for physical graffiti on the outside of the box.

Dude…I’ve seen cats stand on top of covered boxes and drop a deuce right on the lid. Some won’t even walk into a box and crap-blast the entrance mat, making it a no fly zone. YOU SHALL NOT PASS!!! Don’t you get it? They want to use it. They really do. You just have to remove the barriers, auto-scooping and flaming hoops that are blocking them from walking in like a cat.

Guardians choose covered boxes with doors because they don’t want to smell what’s inside. Trust me, your cats are just as sensitive and they don’t want to walk into a smelly pee-swamp, day after day. Clean your friggin’ box! Twice a day keeps the stench away. It only smells because you are a bad housekeeper.

Using the litterbox should not be a balancing act. If your cat is teetering on the edges or reluctant to enter at all, you have to change the presentation a bit. Top entry boxes are not ideal. They allow your cat only one place (where the hole is) to stand upright once inside, thus limiting the most desirable places to squat to one side, the entrance. Not to mention, climbing out of the box, rather than walking straight out is cumbersome and not appropriate for older cats with less agility. Another potential shit show that can be remedied by replacing it with a storage bin and cutting a hole in the side for a smooth entrance.

You want the ideal box, for any cat… Well, here it is…

Number 10: “The Stairway to Urine”

Half of this box is wasted by stairs. Trust me, your cat does not want to shit in an igloo. Not to mention, most cats pee against the back wall, which seeps through the seam and leaks on the floor. It’s also the spiral staircase entrance, low headroom and limited elimination area that bugs me on this one. Many of my clients ditch them because the seam on the side is not urine-tight.

The Jetsons meets Futurama porta-potty. This one sports superior odor control while your cat is one again…humiliated. This looks silly to me. Maybe remove the glass helmet shield and it would almost be ok. This one offers odor control. I dunno. Looks like your cat might come out with a perm afterward.

Two diagonal entrances? What’s wrong with walking straight? Almost there…but the entrance is jacked. This box might be ok if you remove the inside wall or line the two entrance holes up. Otherwise, fill that whole cabinet with litter. Don’t squander one square inch of real estate to avoid tracking litter.

Number 7: The Cradle of Filth

This one is all kinds of wrong. A baby carriage for your cat to crap in. Awesome. I hope it doesn’t rock. Rockabye Baby. You’ll be hating yourself for even thinking about this one. Litterboxes should be stabilized with the entrance on ground level. I’d be willing to bet that this cradle will rock. Not to mention the crapcake cage on the side. Just scoop your box, people.

Lazy people love an automated box. Better save up because you’ll be buying another one when this one clogs and malfunctions. Automated boxes often clog up, scare cats and require special litter types that may not appeal to your cats sensitive paws. If you really want one though, just go to your local landfill. There will be thousands to choose from.

There’s nothing clever about it. No cat should have to dumpster dive to use the box. Oh Klevercat. You and I will never get along, I’m afraid. I have literally seen cats stand on the top and shit all over the entrance rim. Some particularly agile cats seem to do fine, but most of the time, this choice is the garbage can of litterboxes. Use it as such.

The Cement Mixer of litterboxes. Again…smearing poo and pee on the sides of the box is not the way to go. Ok, so how does it makes sense to roll cat feces and urine soaked litter all over the sides of the box? Are you going to clean it? Nope. I didn’t think so.

Another cement mixer / crap roller. Imagine yourself sitting in there. That’s what I thought. Again…a defecation mixer for your cat to stand in. You’re better than this.

Number 2: No Room at the Inn

Do I need to explain why this will go badly? If your cat can stand upright… you’re golden with this automated gem! Why? How? Just don’t. Ok?

The Litter Robot is like a ferris wheel of cat poop in your living room. The automated poop mixer of your dreams. It does the rolling for you and traps the poo and pee smearings in a little box for you. The sides of the box remain an olfactory nightmare for your cat. This one appeals to your disdain for cleaning the box and your love for science fiction. R2DPoo will be a great ice-breaker for your dinner parties and a wonderful experiment in futility. Your cat will likely decide your open clothes dryer or washing machine is The Place To Be/Pee.

This is not the droid you are looking for!

Oops I Did It Again! 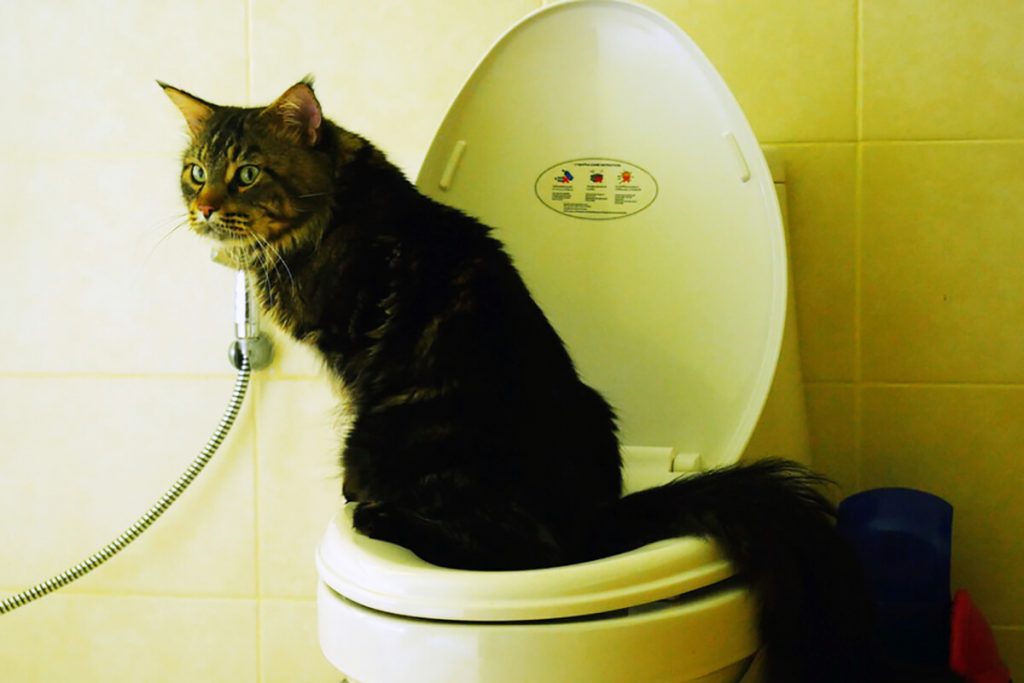